Unlike mixed bed DI, electrodeionization (EDI) is continuous. Because electrodeionization is continuous there are no spikes in quality as when mixed beds are changed for batch regeneration. An additional benefit for EDI users is that there is no concern about the timing of changing batches, or planning for the eventual breakthrough of ions in the bed like silica, sodium, or general conductivity. 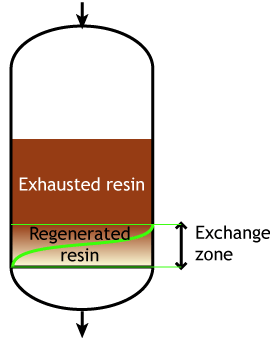 When combined with RO, EDI can generate ultrapure water continuously for 5 to 8 years, sometimes up to 14 years.

Spikes in species like sodium (Na+) and silica (SiO2) are particularly worrisome for power plants, who expect a guaranteed maximum level. Fear of spikes lead to premature chemical regeneration of the mixed bed polishers.

Electrodeionization, a membrane process, continuously removes ions by first capturing them by the internal resins, then using an electrical field to drive the anions toward the anode and the cations toward the cathode. Anions and cations rejoin each other in the “concentrate” chamber and are flushed to drain. Ultrapure water is produced thus with “no regeneration” needed.

Species must be charged to be removed. Hence ions like Na+, Cl–, Ca+2, SO4-2, HCO3–, and even silica (SiO2 becomes H3SiO4–) are removed through this process.

Some TOC is removed, if it is small and mobile enough, and is polar or charged.

Hence, the benefits of a chemical-free, membrane-based, ultrapure water polishing process like electrodeionization (EDI) are clear, and support the replacement of mixed bed DI for the production of ultrapure water for semiconductor, power, and pharmaceutical pure water.

This website uses cookies to improve your experience while you navigate through the website. Out of these cookies, the cookies that are categorized as necessary are stored on your browser as they are essential for the working of basic functionalities of the website. We also use third-party cookies that help us analyze and understand how you use this website. These cookies will be stored in your browser only with your consent. You also have the option to opt-out of these cookies. But opting out of some of these cookies may have an effect on your browsing experience.
Necessary Always Enabled
Necessary cookies are absolutely essential for the website to function properly. This category only includes cookies that ensures basic functionalities and security features of the website. These cookies do not store any personal information.
Non-necessary
Any cookies that may not be particularly necessary for the website to function and is used specifically to collect user personal data via analytics, ads, other embedded contents are termed as non-necessary cookies. It is mandatory to procure user consent prior to running these cookies on your website.
SAVE & ACCEPT